In the Lowertown art district of Saint Paul, Minn., a new outdoor exhibit is on display, and involves much of the community that calls Lowertown home. Inside Out Lowertown features artists and culture makers who live and/or work in the neighborhood. Lowertown touts having the largest concentration of artist live/work studios in the United States, so it is only fitting that the project has sprinkled over 175 photographs of the artists outside, on their warehouse studio spaces. 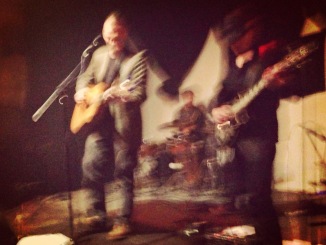 The wind was cool on Friday, just 30-some degrees when I walked to work that morning. It’s fall in Minnesota. The air has a bite, scarves are in fashion and we’re all waiting for the inevitable snows of winter. When the patios close, we head inside to listen to music. That night I had fun playing with blur once again on my iPhone while listening to Pocket of Resistance, one of my favorite Lowertown bands.

If anyone here is new, then you might not know Husband is an uber Bob Dylan fan, and proud of it. Bob just announced his fall tour, which includes a stop in Minneapolis in early November. This information could have prompted this scene in Lowertown Saint Paul this week. Who’s going to the show?

Saint Paul had a breather from the rain today, which meant golden, soft clouds at sunset.

Attending a music show when you’re past a certain age means you need to prepare. One or two naps throughout the day are a necessity, along with comfortable shoes and earplugs.

Run Westy Run, a Minneapolis band with a cult following during the late 1980s and 90s, reunited this weekend with a big show at First Avenue on Friday, Dec. 27. When they added a second show at the Turf Club the following night, husband and I knew what we had to do. Get tickets and prepare.

Minneapolis music legends were in attendance, both on stage and in the audience, which is common at the Turf and one of the reasons I love seeing music at the tiny club.

The first time I drove into downtown Saint Paul, Minn., it was New Years Day, 1999. I was trying to find my way to a place called the Saint Paul Union Depot for the opening of the Titanic exhibition. Even though I was lost, I was distracted by the fact the area I now know as Lowertown, looked like New York City. I had never been to New York, but in my head, at that moment, I felt like I was in New York.

When I had the opportunity to move to the Twin Cities later that same year, I knew exactly where I wanted to live – the place that made me feel like I was in the West Village of New York.

As a 14 year resident of the Lowertown district of Saint Paul, I have watched the city blossom into a beautiful, mature lady. One event that has been in Saint Paul even longer than me is the Saint Paul Winter Carnival. Minnesotans take their winters seriously. They complain about the cold and the snowy commutes like the best of them, but at the end of the day, they celebrate winter. So much so, each January, they put on a two-week party called Saint Paul Winter Carnival.

As part of Winter Carnival, the city lights the parks, decks the halls, and sets up outdoor activities for all to enjoy during the cold months both before and after the carnival. One of these outdoor activities, that reminds me so much of New York (now that I’ve been there many times), is a pop up skating rink. The Wells Fargo Winter Skate is open to the public for skating, broomball, which you see in the picture above, and youth hockey events.

It’s classic and romantic and fun. I hope to bump into you sometime in my northern Midwest version of New York sometime.

Over the course of this Photo 365 project I have probably taken the most pictures of two structures – the Saint Paul Union Depot and the Saint Paul Cathedral. They are both close to home, easily accessible, and strikingly beautiful to me. This morning, as I sat at a stoplight looking at the building and clouds overhead, I realized I hadn’t yet captured the dominating immensity of the cathedral, towering on a hill that overlooks Saint Paul.

The first major snow of the season fell today, causing traffic jams and reinforcing that salt stain on the tip of my boots from last season. It also brought out the kid in two older gentlemen who constructed these happy sledders above a Lowertown sidewalk on day 338 of Photo 365. 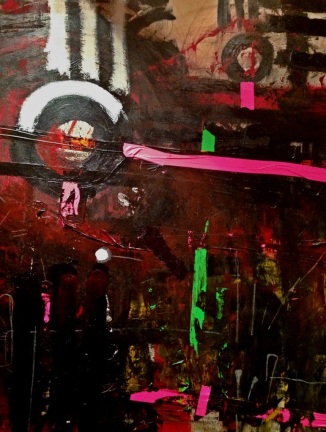 One of my favorite up and coming artists is Adetomiwa Gbadebo, a young painter originally from Abeokuta, Nigeria who now calls Saint Paul home. His passionate inspiration comes from art, love, justice, peace and all things that man can do to rise above.

In this series Adetomiwa chose to use black as his predominate color because to him, black is beautiful, and he hoped that by using it, people would no longer be afraid of what the color can signify in American society.