In the bluffs of the Missouri River lies Weston, Missouri, a quaint town 30 minutes northwest of Kansas City. While some might know Weston strictly as a bed and breakfast town with good antique stores, Weston’s little-known history is based in slavery and the tobacco industry.

Weston was once the second largest port on the Missouri River, just after St. Louis. The call to settlers was “fertile soil,

river traffic and beautiful landscape.” Quickly Weston became a booming town of 5,000, which helped it soar past Kansas City’s population in 1850. However, the boom was short-lived. A fire nearly devastated the entire downtown in 1855. Cholera killed hundreds of residents around the same time. In 1858 Weston saw severe flooding, and the port was destroyed. But perhaps the most damaging element to the town was the slave trade, which was legal in the state of Missouri. Hemp was a major cash crop in Weston during the boom, but it had a tedious growing process and required slave labor to produce the crop. Abolitionists from across the river in free-state Kansas regularly caused unrest in the streets. The disputes climaxed with the Civil War, and Weston crumbled as quickly as she was built. In 1870 there were only 900 residents left, and with no slave labor to assist growing season, the hemp trade ended in 1875. 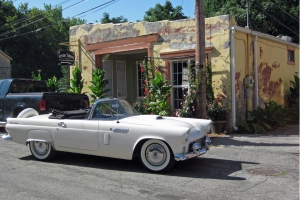 One could possibly argue that what kept Weston on the map was tobacco. While not as large and profitable as hemp, Weston’s second cash crop yielded 25 million pounds in 1861. Today Weston produces approximately 2.5 million pounds of tobacco each year, and until 2001, was the only tobacco market west of the Mississippi.

If you visit Weston, I recommend strolling the downtown to take in the historically preserved buildings. Check out the antique stores and be sure to peek inside the Weston Burley House, which was used for drying and selling tobacco during the heyday. Have lunch or better yet, a slice of pie at the Weston Cafe. But no visit to Weston is complete unless you take a drive in the rolling hills to see the tobacco farms. While the port on the Missouri River may be gone, the soil is still fertile, and the landscape just as beautiful as it was in the mid-1800s.