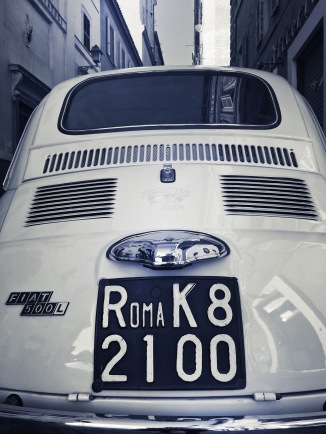 Italy was the first country in Europe I traveled to 11 years ago as a single adult. Not surprising, I immediately fell in love with the landscape and culture. Two years later I went back, hoping to capture the same good vibes, and it didn’t happen. Disappointed, I took Italy off my list and only traveled to new places that I had yet to experience.

My paramount discovery was Rome. I’ve heard you either love Rome or you can’t wait to leave. But I was smitten. Romans live among the art and history that surrounds them. Statues constructed during the time of Julius Caesar are still standing in the elements, not covered in glass or roped off to the public. There is a sense that if a Colosseum built in 80 AD can survive earthquakes and war, you don’t have too much to worry about. Life is good.

One of my quirks is that I dream in the language I’m surrounded by. Within a day of arriving in Italy, my dreams were in Italian. And even though I’ve been home for several days, the Italian in my head still continues. This trait is typically annoying, but right now I hope the dreams stay in Italian for a bit longer so I can image I’m still in Rome.

The sunset in Iowa was quite lovely on Christmas Day as we drove on I-35. 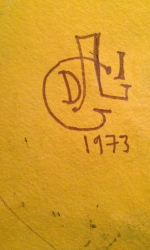 In our digital age, I still have an odd love for good penmanship. It’s probably because I’ve been typing for so much of my life I can barely write a short note without getting a hand cramp.

When husband and I visited the Salvador Dali Theatre-Museum in Figueres, Spain, I was taken by how much Salvadore Dali’s autograph on his paintings evolved over the years, from 1920 to the modern era (check out the Dali signatures). I especially liked his 1973 version on yellow, which is artistic in itself. It would seem Dali was always creating, even down to the simple task of autographing his masterpieces. 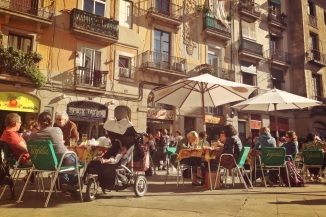 In Barcelona, most tourists pass through Plaza George Orwell on their way to Las Ramblas or to see the historic Barrio Gotic. Husband and I where doing the same when we stumbled into this tiny plaza – and stopped in our tracks. When your band consists of one vegan and one vegetarian traveling in a meat eating nation, you are quick to hone in on a vegetarian restaurant immediately, let alone an entire community. In Plaza Orwell we saw multiple vegetarian restaurants nearly side-by-side with “Vegan!” advertisements hanging from colorful doors. We had found culinary home in Spain.

Many salad and hummus plates into our visit, we decided to dive in feet first, and hit the vegan joint, Gopal, at one corner of the plaza. This is considered “fast” food in Spain with lots of burger options, fake bacon and sandwiches. If you are living on tomato pan and olives, Gopal is a nice break from veggie tapas that you can sink your teeth into.

A few doors down is Vegetalia, which became my favorite Plaza Orwell vegetarian restaurant. A believer in sustainable, organic food, Vegetalia offers saffron rice, Thai tofu, quinoa, tempeh, lentils, brown rice, millet and seitan. You can choose the tapas route or settle in with a well-proportioned entree. Vegetalia doesn’t care how much you order as long as you are satisfied.

There are other great bars in the square serving veggie friendly tapas, with square-seating so you can watch families play in this bohemian atmosphere, which is part of the experience. Instead of passing through – linger. Have food that fills you, heart and soul. 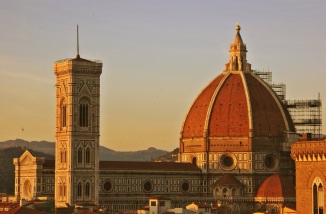 The Florence Cathedral, also known as Basilica di Santa Maria del Fiore and “the Duomo,” towers over the city streets. On this Throwback Thursday I was in Florence, Italy in 2007, and this was the sunset view from the rooftop of my B&B. Not bad, eh? 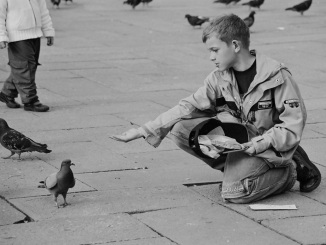 It’s another Throwback Thursday, and today we are in Piazza San Marco, Venice 2005. 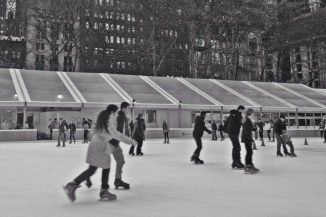 Pop-up markets, especially around the holidays, are one of the unique and wonderful things that help make New York, New York. Union Square Holiday Market is big and bright and smells like pine cones and peanut brittle. Artisans sell their jewelry and handmade products, and vendors offers spices, herbs, oils and sweets. On the weekends the park is packed with locals and tourists alike.

I prefer a quieter pop-up market, and I was reminded of this on my recent trip to NYC. Bryant Park Winter Village isn’t as large as its competition, but there are still 125 booths with high class finery. Better yet, if you are looking to avoid the crush at Rockefeller Center, there is a skating rink, warming house and restaurant, all with a spectacular view of a huge, decked out Christmas tree. 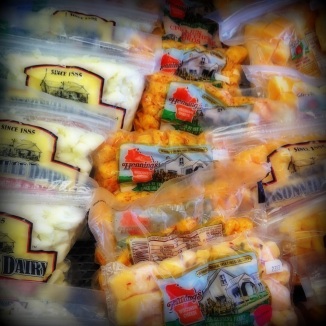 My freshman college roommate was from Wausau, Wisconsin, and she was the first person to introduce me to the small cheese nuggets known as cheese curds. “You know they are fresh if they squeak when you chew them,” she told me. And she was right.

Day 259 of Photo 365 is merely a documentary snapshot. At a gas station stop today in nowhere Wisconsin, I was struck by the cheese curd case. A nearly 20 year resident of the North has made cheese curds are just another snack at gas stations to me. But the girl who was born and raised in Kansas remembered that squeaky cheese doesn’t exist in the Great Plains. It was one of those moments that made me realize that I still have two homes in my head. 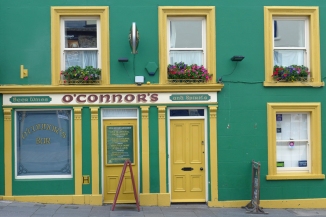 “Oh my God, they are getting us back for Ellis Island.”

When the woman standing behind me at the Dublin International Airport said this outloud, I smirked. Husband and I were in the United States Customs Pre-Clearance line along with hundreds of others including the funny lady behind us. We had already been through security, removing belts, jackets and liquids. Now we were waiting to go through customs before boarding our plane from Ireland back to the U.S.. It made some sense at first – we wouldn’t have to wait in a long customs line in New York, and be held up catching our connecting flight home to Minnesota.

But the woman’s funny quip might have been half true. I have never been required to clear customs in the country I was departing, and while organized, the lines were long and tedious. After waiting for about an hour, we made our way through customs and thought we were home free. Then we hit the next line.

Even though we had already been through security, the hundreds of us that had just cleared customs had to de-robe once again and go through a second round of security – laptops out, shoes off, liquids in the bin. At this point people got downright angry. We were two hours into the process since arriving at the airport, and many couples had to cut ahead of others because they were on the verge of missing their flights.

With this experience under my belt, I offer some first-account advice if you are flying from Dublin to the United States:

And to the authorities at the Dublin International Airport who’s Irish ancestors most likely had similar experiences at Ellis Island … I’m really, really sorry about that. 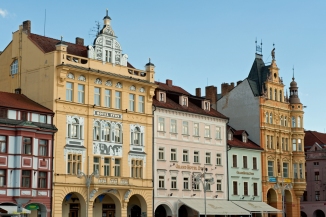 I’ve been going through photographs from my last trip, trying to think about what I can share that isn’t mundane or trivial. I have a feeling a lot of small stories will pop into my head over the coming months. And what’s the small story that keeps popping into my head over and over again? Not the beauty of Prague’s architecture. Not shopping tips for the Great Market Hall in Budapest. No, it’s about how to take a train from České Budějovice in the Czech Republic to Vienna, Austria.

I feel like I should write about this because the stress of a non-English speaking conductor pointing out the window and yelling “AUTOBUS!” is more traumatic than you can image. Especially when you’re going clickity-clackity on a train through the Czech countryside at 80 MPH. What bus?? 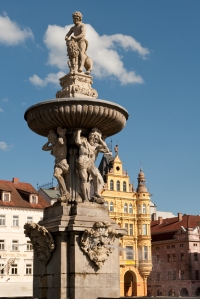 Budějovice or Budvar, as it’s commonly referred to, has one of the prettiest center squares I have seen on my travels. It’s massive in size and has an elaborate water fountain in the center. I’m guessing the reason(s) many people might stop at Budvar on the route from Prague to Vienna is for the same reasons we did: 1) someone in your party wants to see the beautiful square (me); and 2) someone in your party wants to go on a beer tour at the Budweiser Brewery (Husband).

We saw the square but never made it to the brewery (we tried, we really did). After 36 hours of snapping all the pictures our memory cards could handle and continually struggling with Pictionary-like sketching for communication, we hit the road once again on the train bound for Vienna.

There are sub-stories to this story, but I will stick to my point. Even though the Eurail map indicated there was a direct train from Budvar to Vienna, even though the nice young man at the ticket counter nodded his head and said, “Yah, Wein” when I confirmed which train to take – even then – I wouldn’t call the train from Budvar to Vienna a direct route.

If you decide to journey from České Budějovice to Vienna, be prepared.

Congratulations. You have crossed the border into Austria.

Today it is funny to think back about this experience, especially since we had wild stories made up in our heads about what people were actually saying to us in Czech. The basic fact is that the train tracks stop – as in, end completely – and the rail line carts you to the next station, which was extremely close to the border. This experience almost rivals the time when we hit the border of Slovakia, and men dressed in uniform carrying semi-automatic rifles stormed the train car yelled, “Passports! Passports!”

But that’s for another day …