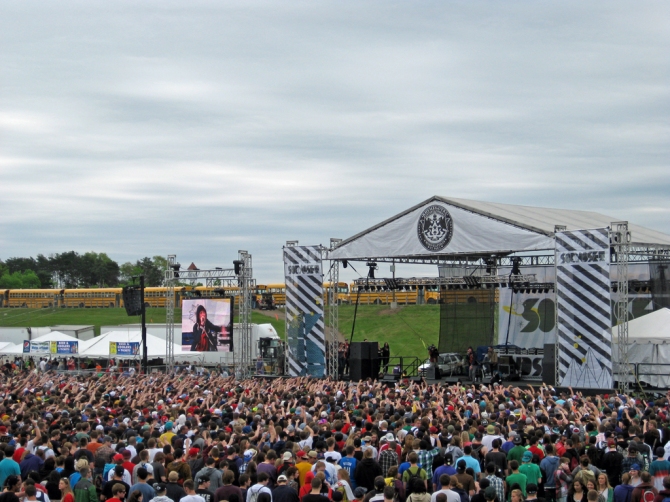 The tagline for Soundset 2011 is “A Festival of Hip Hop,” which is a modest description for the full-on celebration Soundset has become in the last four years. Created by Minneapolis record label Rhymesayers Entertainment in 2008, Soundset has grown from a show in a downtown Minneapolis parking lot to the largest hip hop festival in the Midwest, bringing nearly 20,000 to the outskirts of a south Minneapolis suburb on May 29.

This was my first year for Soundset and I didn’t know what to expect besides a little rain that had been predicted. While there were a few people in the 50-60 year old range, the crowd was predominately young, teens to 20-somethings. But age didn’t matter. The crowd was open and friendly, sharing the love of music with fist bumps and dancing in the mud. At one point when two young women started talking with me about their experience of meeting phenom rapper Mac Miller, one of the girls asked how old I was. When I told her she squealed “You’re the same age as my mom!” And I could tell it was a compliment.

Today Soundset asked its Facebook fans what their favorite part was from the festival. I paused to think about the question, seeing if I could pin-point down one moment. Instead, the word “celebration” kept coming to mind. In addition to 10 hours of non-stop hip hop, Soundset featured a live painting wall where you could watch graphic artists show off their work. There was a skateboard ramp for demonstrations and a final showdown. There was a sponsored DJ academy where anyone could try their hand at scratching. Professional DJs kept the beats booming in the Elements tent, while “B-Boys and B-Girls” (known as breakdancers in my day) threw down their moves.

While big name headliners like Big Boi and De La Soul were part of the festival this year, Rhymesayers works hard to keep Soundset a Minnesota focused event, highlighting their signed artists. Meet and greets are also a part of the plan to bring the music to the masses. Rhymesayers had meet and greet tents set up in both VIP and general areas, and other artists were selling their CDs and shirts in standalone tents. I have never been to a festival where I could walk up to an artist and chat them up. But at Soundset its the norm.

If you’re thinking about Soundset 2012, there are a few things to consider. 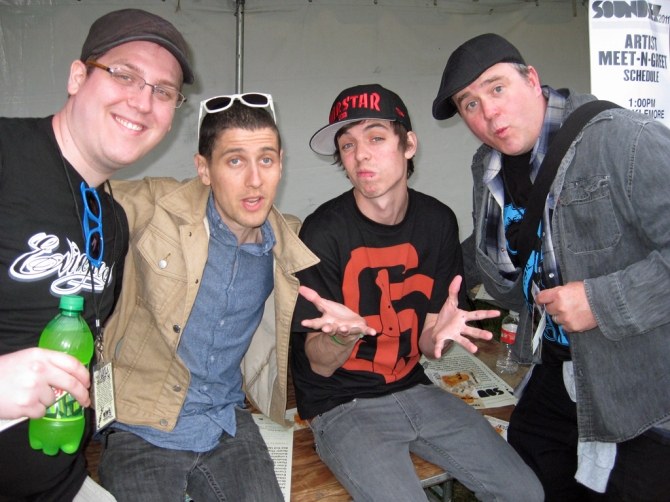 Fans pose with one of my new favorite hip hop artists, Grieves and Budo.

Thankfully husband had a Sharpie on hand when he had a chance encounter with Minneapolis favorite, Brother Ali. The Brother signed husband’s “Zen and the Art of Motorcycle Maintenance” he had packed along for the day. If anyone can translate the phrase in Arabic, let me know!