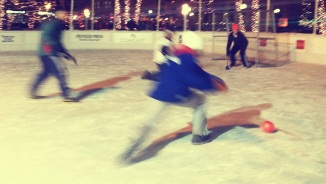 The first time I drove into downtown Saint Paul, Minn., it was New Years Day, 1999. I was trying to find my way to a place called the Saint Paul Union Depot for the opening of the Titanic exhibition. Even though I was lost, I was distracted by the fact the area I now know as Lowertown, looked like New York City. I had never been to New York, but in my head, at that moment, I felt like I was in New York.

When I had the opportunity to move to the Twin Cities later that same year, I knew exactly where I wanted to live – the place that made me feel like I was in the West Village of New York.

As a 14 year resident of the Lowertown district of Saint Paul, I have watched the city blossom into a beautiful, mature lady. One event that has been in Saint Paul even longer than me is the Saint Paul Winter Carnival. Minnesotans take their winters seriously. They complain about the cold and the snowy commutes like the best of them, but at the end of the day, they celebrate winter. So much so, each January, they put on a two-week party called Saint Paul Winter Carnival.

As part of Winter Carnival, the city lights the parks, decks the halls, and sets up outdoor activities for all to enjoy during the cold months both before and after the carnival. One of these outdoor activities, that reminds me so much of New York (now that I’ve been there many times), is a pop up skating rink. The Wells Fargo Winter Skate is open to the public for skating, broomball, which you see in the picture above, and youth hockey events.

It’s classic and romantic and fun. I hope to bump into you sometime in my northern Midwest version of New York sometime.

The story of how the Saint Paul Winter Carnival in Minnesota came to be depends on your source.

The most popular story claims the business leaders of Saint Paul wanted to disprove a New York newspaper reporter who had described their beloved city as “another Siberia, unfit for human habitation in the winter.” This is my favorite version because if true, Saint Paul  created one of the most all-out unique experiences for Minnesotans to snub the reporter’s claims. Today Winter Carnival is a combination of winter sports, mystic lore and odd contests that make the event something close to winter mardi gras.

Celebrating 125 years, the Saint Paul Winter Carnival kicked off over a beautiful, crisp weekend. I went out with my iPhone set to the Hiptamatic app to capture the ice sculptures, parade and experience downtown Saint Paul on a winter’s day, just as the founders intended. 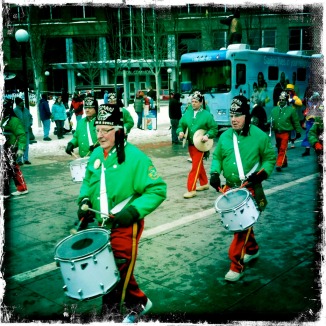 The Drum and Bugle Corps of Osman Shrine has been a force in the Saint Paul community since 1921.

125 year celebration wall of ice with photographs from past year events embedded into the sculpture.

Ice carving is serious business, and you can even watch the sculptures take share, right on the grounds in Rice Park.

Ever been to a cat show? Me neither. But it’s par for the course at the Winter Carnival. This guy was pooped and ready to go home for the day. 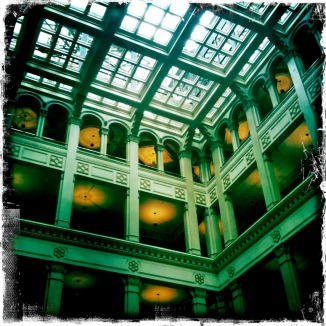 Built in 1902, Landmark Center was the federal courthouse and post office in Saint Paul. Today she’s a lovely restored building with office space, a book store and cafe. She’s also a warm respite when the outside elements have numbed your toes during the Carnival. 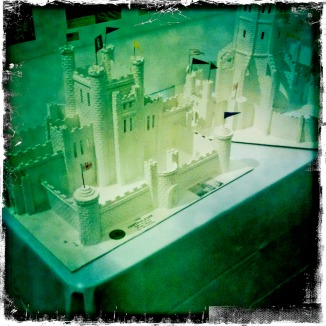 While warming up with hot cocoa in Landmark Center, check out the ice castle display. Ice castles were once a main attraction of the Carnival, and model replicas with advertising from the era are fun to look at. The last castle built was erected for the 2004 Winter Carnival. 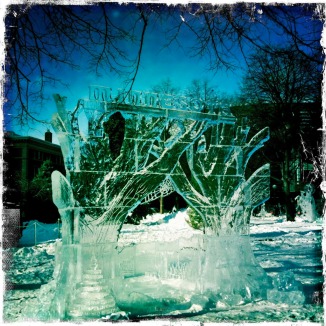 Such detailed work on this Minnesota trees ice sculpture.

Saint Paul’s version of Central Park, there is an skating rink placed across the street from the Saint Paul Hotel every winter.

The Winter Carnival runs through February 6. Find out more about the legend and lore of the Carnival or events happening around the city.