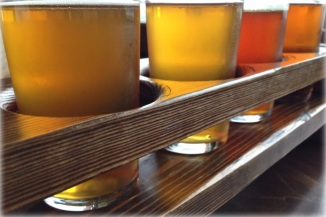 On day 293 of Photo 365, we hauled over the state line to Wisconsin for two reasons: beer and the Green Bay Packers. We have a favorite place to watch the Packer fans in Hudson, Wis., but today husband and I took a diversion. Pitchfork Brewing Company opened in early August, and we wanted to see what the buzz was about. The taproom has a cozy bar with a handful of tables. Husband got the beer flight of five ales for $6, and I had the house homemade root beer. The one television at the end of the bar plays Packer football every Sunday, and when the Packers score, everyone gets a free 10 oz. Firkin. There is also a popcorn machine, and the restaurant next door delivers if you’re hungry.

If you are not a beer drinker like me, stick with the root beer. It is amazing.

Munich is very much the modern city you would expect. Yet the German metropolis does an excellent job of mixing old tradition with new style; qualities which comprise my top five list of things to do while in Munich.

If you’re planning a visit to Munich, go in late September to experience Oktoberfest. The city lives and breathes for the annual event, and it puts you in direct contact with locals. You will run into plenty of Australians and Irish, but the German people take several days of vacation during the 16-day festival to celebrate their heritage. Read more about my Oktoberfest experience in a previous blog post.

The night before Oktoberfest, have dinner at Spatenhaus. The classic Bavarian food is some of the best, and the traditional setting gets you in the mood for beer slinging the next day. It is also located in the center of where old town meets high-end shopping in Munich, so the people watching is top rate.

After a day or several days at Oktoberfest, you might not want to leave the party cold turkey. Enter Hofbrauhaus. Located in the building where Hofbrauhaus beer was originally brewed, the beer hall now holds up to 1,300 people, and there is additional space in a lovely beer garden behind the building. Touristy? Yes. But the live music and spontaneous dancing are a sight for anyone who wants to do Oktoberfest on a smaller scale.

If you are searching for Munich’s more refined side for some quiet time, look no further than the city park.

Englisher Garten or “English Garden” is a large park located near the center of Munich. In fact, it is larger than New York City’s Central Park, spanning just under 1.5 miles. The park has much to see, including a waterfall, Japanese garden, over 100 bridges, an open-air theater and stone structures. Be aware that nude sunbathing is permitted between the Japanese garden and the stone structures of Monopteros if you are strolling through the grounds. I was not visually prepared to see two men playing naked frisbee early one Sunday morning.

The hidden gem in Englisher Garten is, you guessed it, a beer garden. Regularly voted one of the best in the city, Seehaus Beer Garden is a terrific spot to watch the old men of Munich play chess, bantering back and forth. If you place the city park on your “must see” list, visit on Sunday. Live bands play throughout the day from the 82-foot Chinese pagoda that watches over patrons.

Pinakothek der Moderne is everything old Munich is not. After beer and dancing, it’s nice to step into a contemporary world of art, architecture and design from the 20th and 21st centuries. The modern art museum is a fascinating look at German artwork, and its contribution to cars, furniture and even computers. There is a rotating gallery as well as an active schedule of cultural events held at the museum each week.

There is enough sightseeing, shopping and “festing” in Munich to occupy yourself for many days, but I do recommend you take time for a variety of things to get the best sense of the people and culture of Munich.

What do you recommend?

Standing on the rooftop of De Halve Maan Brewery in Bruges, Belgium, you have a complete 360 degree view of town. It was on this rooftop husband and I noticed a church steeple in the distance. After two days in Bruges we thought we had seen every church. However, the spire we spied was in a neighborhood not yet explored. Tour over, beer sampled, we walked toward the steeple we had seen in the distance.

After walking through several quiet neighborhoods, St. Salvator’s Cathedral appeared in a busy shopping district before us. Upon entering, the interior reconstruction and repairs were very evident, but it didn’t take away from the beauty of the cathedral. As with most churches in Belgium, art was hanging in every free space. That had been one of the surprises of Belgium. Many churches we visited on our trip had been converted to art museums or were no longer in use and just historical buildings draped in artwork. But St. Salvator’s was still a congregation.

We took a few minutes to let our eyes adjust to the low light, circled under the organ and around the side to the far wing of

the nave. Some children were praying in front of candles, and I sat close by to take in the scene and the magnificent stained glass window on the opposite wall. That’s when I saw them out of the corner of my eye. NUNS. A group of five women, they were in full uniform, cloaked head to toe in robes and habits. Rosary beads jangling, they walked past me toward the alcoves of saints on the east wall. I had to smile because they were not parishioners as I originally thought, but tourists. The camera backpacks strapped to their shoulders gave them away.

I followed the traveling sisters around the church and watched what they were interested in. The nuns stopped at each piece of religious artwork and the gold chests that held bone remnants of various saints. I wish I could have understood their whispers because on occasion, they would speak to each other and giggle. They were definitely women with a sense of humor.

When the sisters stalled to linger in one particular area, I swept past them to finish my tour of the cathedral. I walked by an area that was sectioned off and peeked over the barrier. A smaller chapel was in the midst of repair and the section had been barricaded to avoid injury to visitors.

While I was looking at the chapel, I felt someone staring at me. Turning slowly to my left, not to be discovered, I realized a statue of Jesus was in the corner above another set of prayer candles. There was debris at his feet and I was curious if the construction nearby had spilled over onto the statue. I pushed past some chairs to get a better look at what the debris was. Pictures.

At the feet of Jesus were photographs. Dozens and dozens of photographs. Some people had obviously come to the corner with purpose – to light a candle and leave a picture of the person they were praying for. Other photographs looked like a spiritual moment – tiny wallet sized photos left when the statue had been discovered by people just like me. I instantly wished I had a photograph of someone to leave behind as well. There was an incredible sense of peace and healing in that place, standing at the feet of Jesus.

I went back to the nave to view the remaining stained glass I had not seen, and to wait for husband. I took in all of the unexpected pleasures I had experienced inside St. Salvator’s. For me, one of the joys of travel is watching how others appreciate the same experience.

I even got one picture of the nuns before we departed the church grounds. I just hope husband got a shot of them too,considering he was looking at this camera when they walked by.

Tip: The only Tourist Information office in Bruges is located at the train/bus station. Make sure you stop there for a map before heading into town.